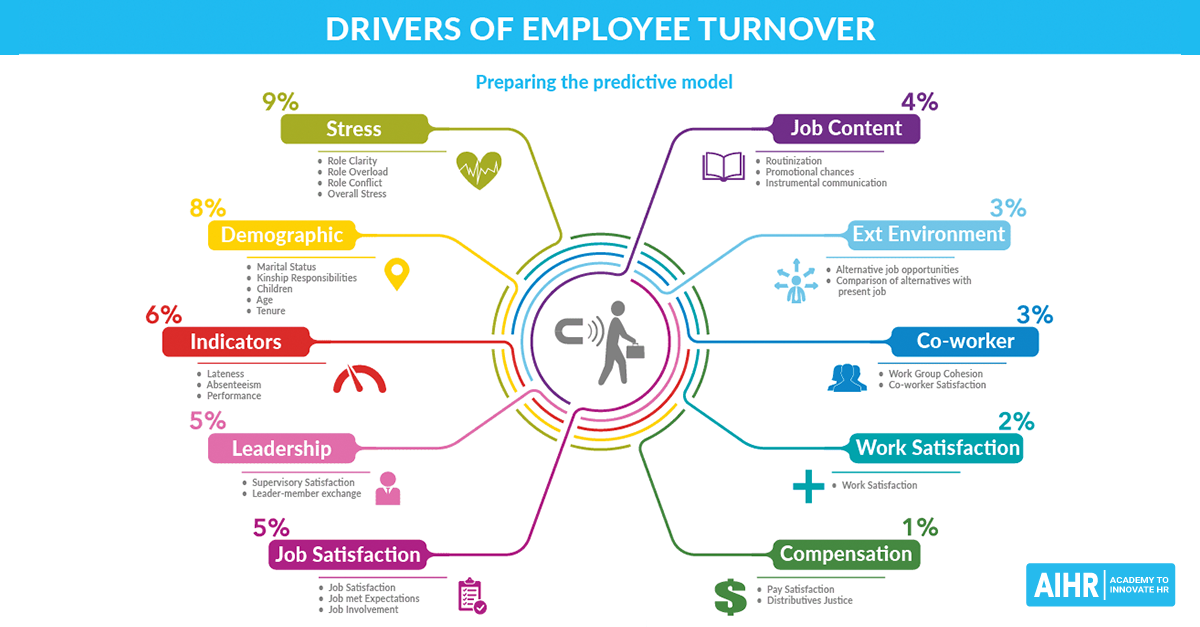 In our previous blog on turnover, part 1, we showed a business case for employee turnover. In this blog, we will take a closer look at the science behind turnover and ask ourselves the question: “Why do people quit?”

In 2000, three scientists combined all existing literature on employee turnover. This resulted in a meta-analysis of over 60.000 employees! Their findings are presented in an infographic. We will explain the infographic’s different categories in more detail below. Some elements are self-explanatory, while others are more complex. We will explain all of them anyway, so don’t be afraid to skip a few lines.

In our next blog, we will give a step-by-step explanation of how employee turnover can be predicted, using R. R is software that is very well suited for analysis, and with this blog you can analyze turnover yourself.

However, first we want to give you an idea of the relevant variables in this analysis – and of what it is that makes them relevant. In this blog, we will explain all the variables we mention in the infographic below. Some variables are practical and available from a company’s systems. Others are much harder to measure and/or more theoretical.

Demographic variables act as strong predictors of turnover intentions. They are easy to measure as well.

How to measure demographic variables: Demographic information is in general easily accessible through an organization’s HR Information System.

Before we continue with stress, let’s go into the interaction of variables. Nothing is as simple as it seems. Variables often interact with each other. Depending on this interaction, some effects will be enhanced while others will be reduced.

For example, marriage will play a more important factor when people are younger than later in life. I have seen this at big.

When a man and a woman, both with busy jobs, gets married in their early 30s and plan to have children, they make different choices. The woman is more likely to quit when her work load is high than the man. The woman wants a more relaxed and flexible work environment which offers the possibility to take extra time off to raise the kids. Indeed, she may want to stop working for a few years to devote extra attention to the kids. The man, however, will be less likely to quit. He will be more likely to experience the responsibility of providing the financial stability to raise a family.

In other words, one variable can act very differently depending on another variable. This is called ‘interaction’, and is important to keep in mind when you want to predict something.

In part 3 of this series we will get more practical and look into how you can build a predictive model on turnover (read our blog on predictive analytics to learn more). If you haven’t already, check our previous blog on turnover. In this blog, we explored the business case of predicting (and preventing) employee turnover – which is huge!

How to measure stress: Job descriptions may give information about role clarity. In addition, when someone temporarily takes over the position of his/her manager, it is likely that there will be a role conflict. This information is difficult to measure, but it is not impossible. Role overload and overall stress are particularly hard to observe. Even more so since stress is often subjective. In order to measure them you need to use surveys.

Job content is all about how people experience their job.

How to measure job content: There is no system that offers the possibility of entering job content or level of routinization, so surveys are the way to go. Instrumental communication can be analyzed through certain text mining techniques, which analyze written internal communication.

People constantly compare their situation with that of others. This also holds true for people’s jobs.

How to measure external environment: Some of the specialized HR consultancy firms have access to large amounts of detailed function data. This data gives a relatively accurate description of the demand for a certain job. People with popular jobs can more easily find an alternative job, have more alternatives and are more likely to be approached by recruiters. By matching the job functions at your company with their respective databases you can estimate which employees will be most tempted to switch. Your data-miner will be in higher demand than your secretary, because the former is more sought after and harder to replace.

As you can imagine, satisfaction with one’s work and job is an important indicator of turnover.

Map out your
Path to HR Leadership

Try our need tool to determine the direction in which you want to progress based on your HR career goals and capabilities. 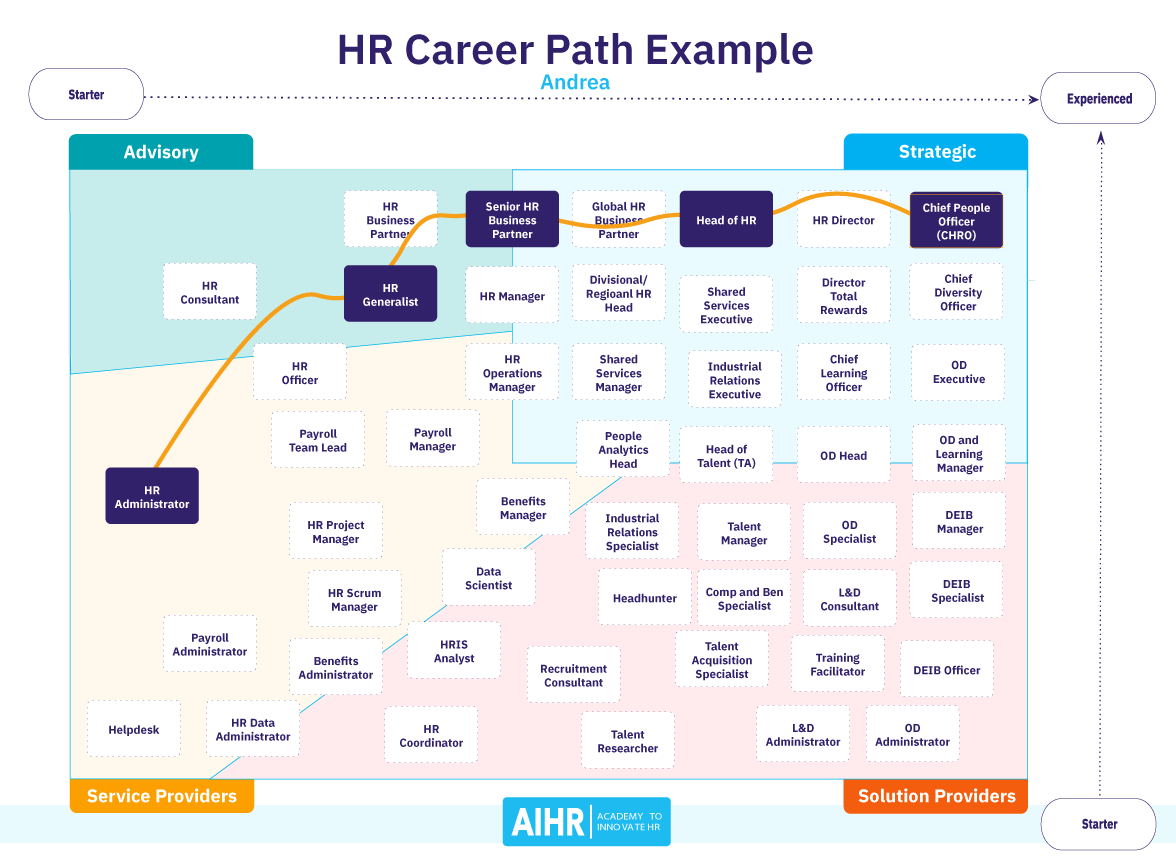 Compensation is often seen as an important predictor of why people leave. However, this is not always true. In fact, pay is a non-significant predictor of turnover intention. Pay satisfaction, on the other hand, is.

How to measure compensation: you can benchmark payment data with market data to find a pay-comparison. When someone is underpaid, he/she will be more likely to be dissatisfied and leave. Benchmark data may give you an indication about whether you under- or overpay your employees.

The age-old adagio “people leave their bosses, not their jobs” holds true in research.

How to measure leadership: Unfortunately, the leadership variables are hard to measure. However, when you have large teams you can use the team as a control variable in your analysis. If one team loses employees much more rapidly than other teams, it might indicate that there’s something about the team manager’s leadership style. A closer analysis is always needed to justify this conclusion, of course.

People often love their jobs because of their colleagues. Co-workers are a factor that predicts turnover.

How to measure co-workers: attitudes towards co-workers can only be measured through surveys.

There are also a number of factors that might indicate whether or not people will leave the company.

How to measure these indicators: Absenteeism data is usually already recorded by organizations. This data can be used to predict turnover. In addition, performance data is also easy to obtain and often available through the company’s performance management system.

A final note: I think this article shows that there is a significant difference between theory and practice. All the variables studied in literature are survey based and therefore hard to back up with facts. This makes it hard to apply theory to practice. However, in our next blog we will give a step-by-step approach on how to do this using R!

In addition, we based this research on a very large meta-study. Most of the studies analyzed in this study are correlational. Some use a longitude design, but not all of them. Keep that in mind when interpreting the results of this blog: correlation does not equal causation. How To Use HR Data Visualization To Tell an Impactful Story