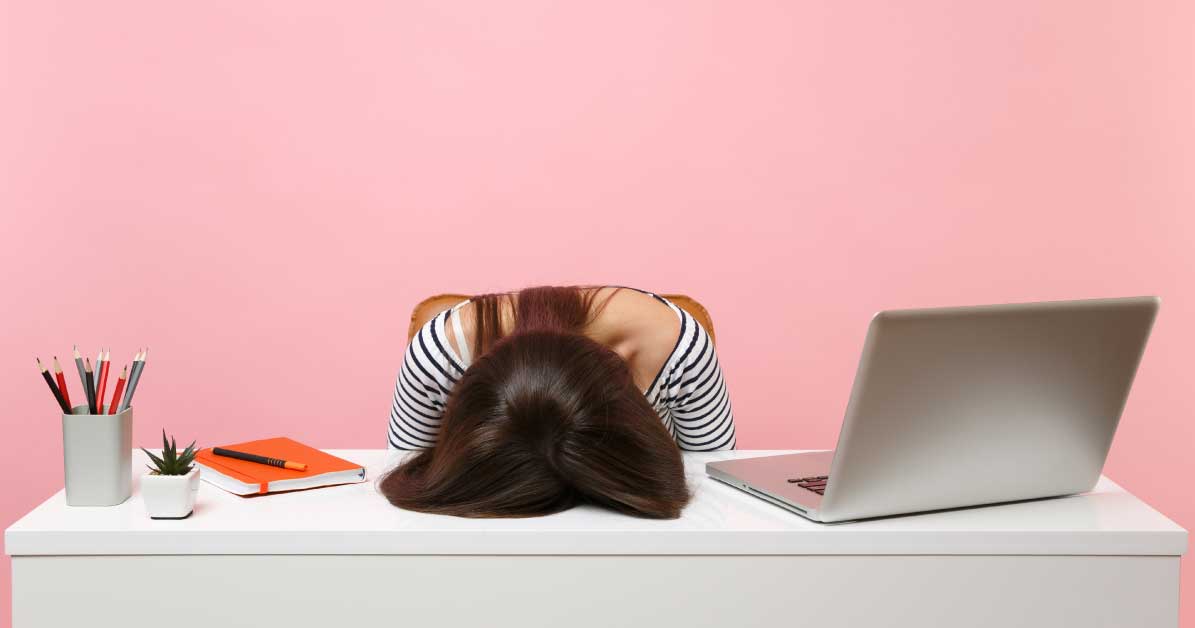 Presenteeism is a topic that has gotten an increasing amount of attention. Showing up at work but not being fully productive is alarmingly common and costs U.S. companies over $150 billion a year. In this article, we will explain what presenteeism is, how it differs from absenteeism, explore its causes and show a proven intervention to reduce it.

What is presenteeism? A definition

Presenteeism in the workplace is a relatively novel concept. Although it was first mentioned in a research paper in 1970 by Smith & Pittsburgh, a quick search on Google Scholar shows about 250 articles published that mention the topic until the year 2000. It has since then grown in popularity, with over 3000 papers mentioning the topic in 2019 alone.

Presenteeism is a situation where workers go to work despite being sick or tired, affecting their productivity and work quality.

Presenteeism at work leads to a productivity reduction, lower quality of work, and an increased risk of developing health disorders. It is particularly high among groups that experience a lot of stress, like nurses. To assess the impact of presenteeism, tools like the Stanford Presenteeism Scale can be used.

As mentioned in the introduction, presenteeism in the workplace is alarmingly common. The total cost of presenteeism for U.S. companies exceeds $150 billion a year, which is reportedly more than the cost of absenteeism (Hemp, 2004).

Want to add Organizational Development skills to your HR toolkit? Download this concise introduction to OD. Written by HR, for HR. 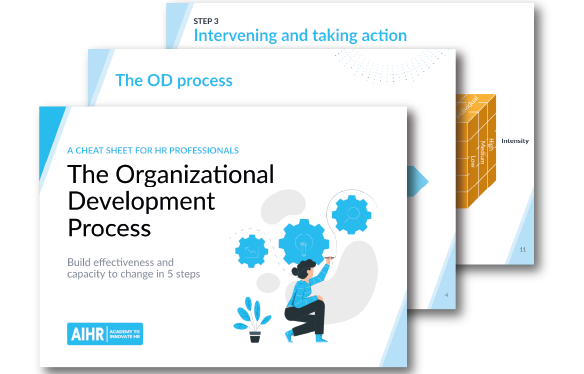 This is confirmed by a detailed study from Collins and colleagues (2005) who determined the cost of health conditions in the U.S. workforce at Dow Chemical Company (Dow). They found that chronic conditions were the most important predictor of work impairment and absence. The total cost of chronic conditions was approximately 10.7% of the total labor cost. Of this, 6.8% was attributable to presenteeism cost and 1.0% to absenteeism.

Presenteeism at work shouldn’t be confused with absenteeism. Absenteeism is an unplanned absence due to sickness or other causes. Presenteeism occurs when someone goes to work even though they are not fully healthy. This reduces their productivity.

This will sound counter-intuitive but stay with me: presenteeism is not always a bad thing.

To give an example, would you rather have someone be absent and not work, or be present and work less effectively? This question poses a challenge for an HR professional or manager. Staying home helps recovery and prevents the patient from infecting colleagues. However, when your organization is dealing with a case of long-term absence, the answer might be different.

A best practice when dealing with long-term employee absence is to get the person back to work as soon as possible, even if it is just for half a day per week. From there on, the employee can get used to working again, and the workload can be slowly increased until the person is again working at full capacity.

In this example, there is definitely a case of presenteeism as the employee will be less effective when at work – but it is still better than him or her being fully absent.

Presenteeism could have any number of causes. To start with the good news: many of the medical problems that cause presenteeism are relatively benign. If the causes are of a serious medical nature, the employee would, after all, stay at home.

One form of presenteeism that we’ve all experienced is a lack of sleep. After a night of heavy drinking with an old friend and only a few hours of sleep, our productivity will be affected by the hangover and more general lack of rest. We will struggle to pay attention and maybe even doze off once or twice.

Other times there are more serious causes of presenteeism. These include conditions like depression, diabetes, (seasonal) allergies, arthritis or joint pain, asthma, back or neck disorders, high blood pressure, migraines/chronic headaches, and so on.

Let’s take a closer look at one of these, depression. The Center for Workplace Mental Health reports that 6-7% of full-time U.S. workers experienced major depression within the past year. The economic burden of this is estimated to be $210.5 billion per year. In comparison, for every $1 spent on treatment, $1.55 was spent on workplace cost.

High control jobs showed higher lost productive time compared to low control jobs. Although this may seem a bit counterintuitive, workers with high levels of control can more easily adjust their work pace to correspond to how well they feel, thus impacting their productivity. This is harder for people in jobs with lower levels of control.

Jobs that were both in low demand & high control had the highest lost productive time as the low demand provides the flexibility to slack off.

This brings us to the next topic: how do we measure the impact of presenteeism? To answer this question, we have to look at the academic literature. The most commonly used measurement for presenteeism is the Stanford Presenteeism Scale.

The Stanford Presenteeism Scale (SPS-6) assumes the employee has a health problem and tries to assess the degree to which this impacts the completion of work and the employee’s focus.

The scale can be used to calculate the impact of presenteeism on performance for different job categories within the organization. Interventions targeted to the groups most impacted by presenteeism will be most effective and cost-efficient.

The respondent is first asked to identify their primary health condition (the condition that has affected you the most in the past 4 weeks) on a checklist. This condition is then used in the Stanford Presenteeism Scale. If the employee does not have a health condition, they can skip the whole survey.

The SPS-6 consists out of 6 items, measured on a 5-point Likert scale. This scale ranges from “strongly disagree” to “strongly agree”. The items, first published by Koopman and colleagues (2002), are as follows:

In the survey, ‘health problem’ can be replaced with the identified primary health condition.

The internal consistency for the scale ranges between .7 and .8 (Koopman et al., 2002; Cicolini et al., 2016;…). Benchmark scores on the scale can be compared to the means and standard deviations provided in the referenced articles.

For commercial use, the Stanford Presenteeism Scale (SPS-6; 2001 version) is jointly owned by Merck & Co., a pharmaceutical company, and Stanford University School of Medicine.

How to Reduce Presenteeism? A 3-Step Intervention

1. Determining the prevalence of presenteeism

In the first step of our presenteeism intervention, we need to determine the prevalence of illness and medical problems that undermine job performance.

This is important as it helps us to identify the severity of the problem. During this stage, we can also assess the most common ailments that reduce productivity. Oftentimes, different illnesses require different solutions so knowing which are most prevalent helps us to come up with solutions.

There are different approaches to assessing the prevalence of presenteeism. One is to randomly select a number of employees and give them a questionnaire like the SPS. For a more qualitative approach, you can start with the people that have the largest reported problem.

The best way to identify this group will depend on your organization, available data, and local privacy regulation. If data on medical conditions are known by the employer (e.g., through a company doctor) this would be an easy starting point. However, this kind of data brings along ethical issues and is often protected. For example, in most European countries, this kind of data is considered sensitive data and cannot be reviewed unless there is explicit agreement from the employee.

Another approach is to start with people who are frequently ill for a brief duration. This could be an indication of a more severe condition that also affects performance when the employee is at work. A third approach could be that the presenteeism intervention is publicly announced, or communicated to a subgroup of employees. If this includes the intention of the project – facilitating health issues for the employee and making their life easier – people will be more likely to sign up voluntarily.

The identified groups can then be interviewed or given a questionnaire like the Stanford Presenteeism Scale.

In addition, there are public health data on how common illnesses affect functioning and performance. These can be used as additional data sources to make the estimation.

Lastly, the Stanford Presenteeism Scale can help to make an estimation on the impact of presenteeism for the organization. Different studies contain benchmarks for countries like the U.S., Italy, Japan, Brazil, the Netherlands, and many more (including local translations) and different job categories.

In the case study at Dow, we mentioned at the beginning of this article, the following questionnaire was used. This is an adaptation of the SPS we discussed earlier.

With this data, the amount and value of hours lost can be calculated. Here you can work with the average hourly cost of labor. Do note that in order to generalize this data over the entire organization, you need to make use of a randomized sample.

The final step is to create cost-effective solutions for presenteeism. When you arrive in this phase, you have an estimation of cost, you know the prevalence of different conditions in the organization, and you are able to calculate which condition is the most costly.

Best practices are to interview a number of people with this condition (if you haven’t already) and inquire about ways to alleviate their symptoms and how, with their condition, they can still make the most of their work hours. This is usually a rich source of input for long-term solutions. Next to the interviews, there is desk research. There are many specialist patient organizations that can also give you valuable input and help to come up with solutions.

An example. When this intervention was conducted in a blue-collar division of a construction company, older employees often reported back pain as a result of lifting heavy objects. Their back pain prevented them from effectively lifting these objects and operating tools like heavy wheelbarrows. If they did, their back pain would only increase resulting in less work being done and occasional absence to recover.

This was relatively easy to fix for this organization with simple lifts that lifted the objects up with little efforts, electronic wheelbarrows, and other ergonomic tools. These investments had a great ROI as cost went down, physical pain was reduced, and workers were happier.

Presenteeism is a situation where workers go to work despite being sick or tired, affecting their productivity and work quality. Presenteeism at work leads to a productivity reduction, lower quality of work, and an increased risk of developing health disorders. It is particularly high among groups that experience a lot of stress, like nurses.

When does presenteeism occur?

Presenteeism occurs when people who are ill or tired, still go to work and underperform because of this.

Presenteeism is caused by (mostly) minor health conditions that allow a person to go to work but inhibit them from working for 100%. Examples include allergies, arthritis or joint pain/stiffness, asthma, back or neck disorders, depression, diabetes, heart or circulatory problems, high blood pressure, migraines, and more.

How to reduce presenteeism?

Presenteeism can be reduced by 1) identifying how prevalent it is, 2) calculating productivity losses, and 3) creating cost-efficient solutions for each of the conditions that cause presenteeism. The 12 Key Functions of Human Resources

HR Finance 101: A Guide To Finance for HR