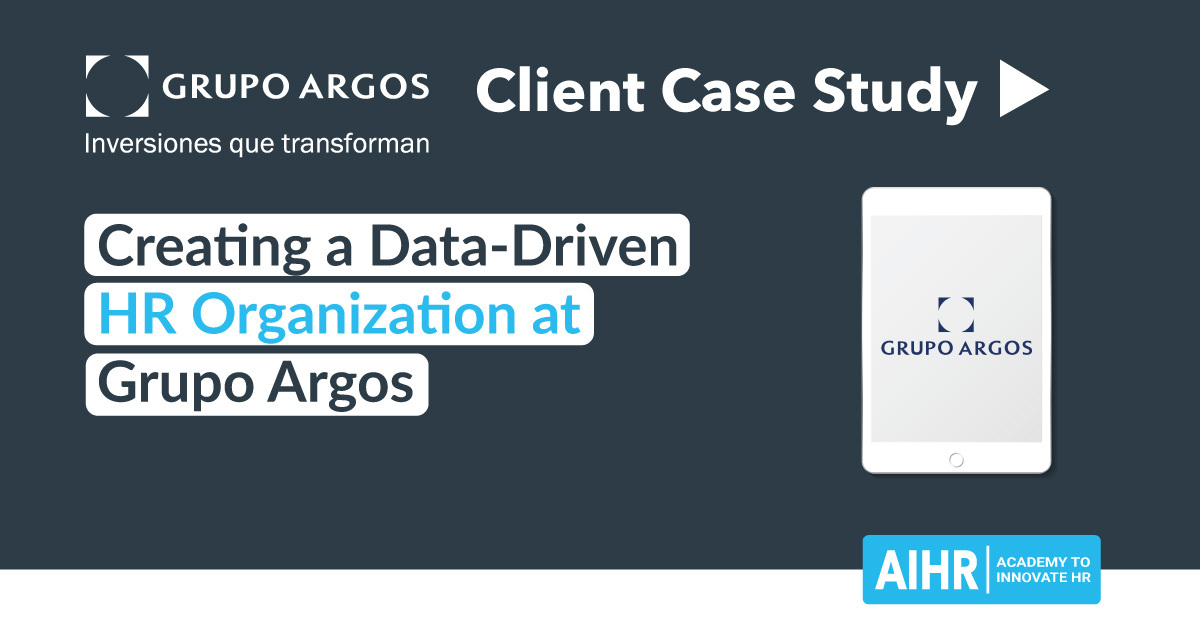 Within six months of its creation, Grupo Argos’s People Analytics team was creating reports that were used in strategic decision-making at the very highest level of the organization. Find out how they made this happen — and how AIHR helped them on their journey.

Founded as the Cementos Argos Company in 1934, Grupo Argos has grown into a holding with over 13,000 employees spread across their almost 100 subsidiary companies. All employees and subsidiaries are served by a single HR organization, which is part of Grupo Argos’s Shared Services Center.

In early 2019, a group of 30 HR specialists enrolled at AIHR, the Academy to Innovate HR. The main goal was encouraging a more data-driven mindset in the organization — which was definitely a success.

Soon after, the HR organization decided to form a dedicated People Analytics team. This was a major shift from the previous situation, where IT had owned all data within the holding.
Thanks to the AIHR courses, Grupo Argos had a group of HR specialists with new analytics, data visualization, and dashboarding skills, and the organization took full advantage of that. “My manager identified people with HR skills as well as the ambition to work with data,” says Guillermo Restrepo, the company’s HRIS admin. He, along with the new Head of HR Analytics and 2 other data-savvy HR specialists who were also enrolled in AIHR analytics courses, founded the Grupo Argos People Analytics team.

Even though the team is just half a year old at the time of writing, it has already managed to make a huge impact on the organization, as we will reveal later in this case. Guillermo attributes this success to skills they learned at AIHR. “We followed two courses about leadership in data teams, which helped us understand how to build and manage an analytics team: the basis of getting started in analytics.”

The case for awareness

The first challenge for the new People Analytics team was data quality. “We took stock of all the data we had, assessed the quality, and made decisions about data cleaning,” says Guillermo. “It was a lot of work.”

Another perhaps less obvious priority for Guillermo was creating awareness about People Analytics among decision-makers — something else he learned during his studies with AIHR. “You need to get managers on board. If they don’t ensure that the company makes data-driven decisions, then HR Analytics isn’t going to work. HR Analytics is important, but it costs money. And it will cost even more money if you don’t do it properly, as you’ll be investing in something you’re not using.”

Awareness wasn’t an issue in the highest level of Grupo Argos’s management, as would soon become clear.

The People Analytics team was only just up and running when the Corona crisis hit. Nevertheless, the company’s Presidents knew where to turn for the people data they needed to make critical and urgent decisions.

“They asked us to make a data visualization combining data from our HR system with virus data,” says Guillermo. The team created a complete data table and clear graphics, and the final result was used in the Presidents’ weekly meetings.

“We’re very proud to have worked on this project,” says Guillermo. “Our reports were used to make decisions about employee safety. We weren’t just doing our job. We were trying to save lives.”

The People Analytics team’s contribution to the Grupo Argos Corona response created awareness throughout the entire organization and demonstrated just how valuable People Analytics is. And Guillermo can already see the difference in his work.

“HR is continuously coming to us for information, reports, and graphics,” he says. “They aren’t making decisions based on gut feeling — they always check if their information is correct so they can make better decisions that our people want and need.”

Now the People Analytics team is on the map within Grupo Argos, Guillermo and his colleagues are working towards their next goals. First on their list is offering predictive analytics services. “We already have all the information we need,” says Guillermo. “Now we just need to perfect it. Offering our internal clients predictions that help them save money and make better decisions: that’s our focus.” Simona's passion for learning has made her an expert in translating complex information into easily digestible learning content. Together with her team of talented Marketers at the Academy to Innovate HR (AIHR), Simona helps thousands of HR professionals to find the online certifications they need to stay relevant and learn modern & in-demand HR skills.

Data-Driven HR mindset: Only 2 out of 10 HR departments use data to guide their decisions

The current state of HR competencies: Only 2 in 10 HR professionals have future-proof skills

How to Become a Chief Human Resources Officer: What You Need to Know

People Advocacy for HR Professionals: All You Need to Know