In this post, we present the results from a research study on using psychometric tests to predict road traffic accidents (RTA) at a local company in Zimbabwe. The impact of accidents is grave: it impacts the drivers, client property, insurance rates and the vehicles they operate. We tested 54 drivers using different psychometric tests to find out if we could predict superior driving performance for new hires. The surprising results totally changed the way our client hired new drivers.

To do this we tested 54 drivers from a local company in Zimbabwe using the Fitness To Drive Plus Vienna Test System. Each driver’s test results were then matched with his/her record of road traffic accidents from 2014 to 2015. This allowed us to build a logistic regression model (using psychometric results and accident records) that distinguishes good drivers from bad drivers.

The main objective of the research is to ascertain the psychometric attributes can be used to identify if an individual is a good or bad driver. The logistic regression model that is subsequently built is meant to quantify a driver’s proneness to accidents using their Psychometric Test scores.

Who was involved in more accidents? The chart shows that 26% of the accidents involved personnel that are between the ages of 31 and 35 years. 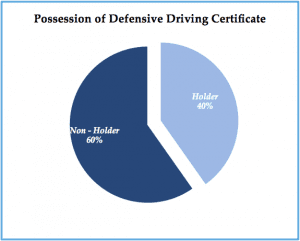 Defensive Driving Certificate: A waste of time and money? Concentration – Is a special function of attention, namely selective attention. In driving this is called on every time that a stimulus needs to be shielded from other stimuli and concentration needs to be shifted from one stimulus to another – for example when approaching an uncontrolled intersection. Accident analysis has shown that the majority of recorded traffic accidents are attributable to inattention

Reactive Stress Tolerance – Involves the individual’s ability to react quickly and accurately even when under stress. From the perspective of traffic psychology, a high level of stress tolerance is particularly necessary in stressful situations, such as those encountered by professional drivers driving in large cities (Burgard, 2004). Numerous studies show that driving performance deteriorates as mental workload increases.

Reaction Speed – Is the time that elapses between stimulus presentation and the start of the mechanical response movement. A high reaction speed (short time) means that the respondent is good at responding with appropriate speed to relevant stimuli or stimulus constellations.

Motor Speed – This score provides information about the respondent’s speed of movement. A high motor speed (short time) means that the respondent is good at implementing planned action sequences with appropriate speed in reaction situations.

Please refer below for the results of the logistic regression model:

As shown in the table above, only two (2) of the dimensions (areas of assessment) have a significant relationship with a driver’s road traffic accident risk (p-values were less than 5%). Although the model has only two significant assessment areas, inclusion of all dimensions in the model leads to an improved classification of drivers’ accidents risk profiles.

Accuracy of the Logistic Regression Model

We used the classification table below (confusion matrix) to assess the validity of the logistic regression model.

The same approach can also be used to identify training needs among drivers who are already part of the organisation. In the event that the model has identified a certain driver’s road accident risk as too high, the driver may be re-assigned to other areas of operation in the organisation. Doing this will reduce the costs incurred as a result of accidents. Such costs include higher insurance premiums, repairs which expedite “wear & tear”, lost productivity, both client and company property damage, loss of business or clients and even loss of lives.

Demographic variables such as driving experience can be misrepresented by prospective drivers. For this reason, we recommended that for recruitment purposes, psychometric tests be used. They have the advantage of being objective and cannot be misrepresented.

We also noted in our data exploration that holders and non-holders of a Defensive Driving Certificate bare the same road traffic accident risk. This affirms our approach that the use of psychometric tests is highly recommendable. Memory is Managing Consultant of Industrial Psychology Consultants(Pvt). He has extensive experience in Human Resources Management, in both line function and consultancy services. With IPC Consultants, his aim is to maximize returns on human capital.

9 Recruitment KPIs to Measure Success in Your Organization

Automation, augmentation, and the future of HR: The business case for Digital HR

Training New Employees Effectively: All You Need to Know to Start